Thinking about getting a Wii U

For all the consoles in Nintendo's vast legacy.
Post Reply
62 posts

Drevin October 1st, 2013, 12:38 pm
Flock off
I think now is a good a time as ever, since the games coming out for it are looking quite good. I mean, you'll have to get it sooner or later for Zelda and SSB4 so... and there is the WWHD bundle to consider too. Although the game is digital, not a physical copy.

Drevin October 2nd, 2013, 1:00 pm
Flock off
Yeah I just use my GCN for gamecube games anyway. Wii has been permanently put away

AC Dasher October 2nd, 2013, 4:35 pm
Squonk
I think when I get a Wii U, I'll do the same as Dre and just put all my virtual console games on the U and just shelve the Wii.

I wasn't excited for Super Mario 3D World, but maaan it's looking choice after the newest trailer from Nintendy. Lost Worlds still looks good; it's delayed until the 29th now, but big whoop. And Tropical Freeze, man oh man, looks good but now it's delayed until next year!

Wonder who will get a Wii U first... Me or Ray? Probably Ray, if anyone.

Ray October 2nd, 2013, 6:55 pm
I'm thinking I'll make my move pretty soon. I wanna get rid of these Wiis ASAP. That 25$ coupon is excellent, thanks Monkey. I'll need a new solution for GCN though, I've only got component cables but I'll need DVI or HDMI output.

Drevin October 2nd, 2013, 8:28 pm
Flock off
I don't think hi-def cables exist for GCN. 480p is max resolution on most titles. I think there are a few that don't support progressive scan tho.
Warp2063 October 3rd, 2013, 5:33 am
Just a Splatter
I jumped on the Wind Waker HD bundle, myself. Wish I did have the physical copy, but the digital version is fine (and got me extra Club Nintendo coins). For now, most of my GameCube games get played on my GameCube hooked up to an SDTV rather than my Wii hooked up to my computer monitor, due to the fact that I very much hate stretched images, and my computer monitor won't let me force a 4:3 aspect ratio. Some of favorite games don't support progressive scan anyway, and I don't have component cables for my GameCube - only my Wii.

You can transfer (pretty much) all your VC stuff over to the Wii Channel on the Wii U for free. For the Wii VC games that you want to upgrade to the Wii U versions, you can optionally pay a small upgrade fee. Only a few of those exist so far from what I can tell.

Pikmin 3 is likely my next purchase, with MH3U as another candidate. Super Mario 3D World and Sonic are also ones I'm looking forward to. Also tempted by Scribblenauts, but not its price tag. EarthBound probably as well.

Wish I'd known about that $25 off thing at NewEgg. Oh, well.

They just updated the Wii U system software to 4.0 a few days ago, and it lets you play (or at least view) Wii games on the GamePad's screen (Although still with a Wii Remote). It's neat.

Shit. This is one thing I did not consider. My two monitors are both widescreen and seem to have no support for 4:3 display. Damn.

I was considering this converter but now IDK. 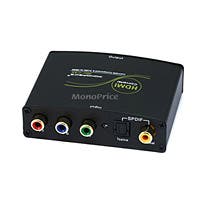 Shit. This is one thing I did not consider. My two monitors are both widescreen and seem to have no support for 4:3 display. Damn.

I was considering this converter but now IDK.

My monitor does allow 4:3 aspect ratio forcing, but ONLY for analog inputs - meaning VGA. However, I only own the suckiest VGA converters, and they're almost intolerable.

Drevin October 3rd, 2013, 10:07 am
Flock off
I just hooked up all of my retro consoles to a RCA switch, and then one RCA cable into the TV. I think most modern HDTVs have only one component hookup and if you're lucky one composite. Yeah they look a bit muddy all blown up but at least there is the 4:3 support.
Post Reply
62 posts

Users browsing this forum: No registered users and 8 guests