I feel like kids are going to break/lose the parts and I worry about lots of assembly/disassembly wearing it down.

I so badly want to know more about the tech.

Looks very sleek, not what you'd expect from Nintendo design-wise. I sure hope everything is as seamless as the video makes it out to be - that'd be very cool.

Some of the games looked like Wii U games but I don't think they are per se. The Mario Kart 8 lookalike had Boo in it, who was missing in 8. Splatoon looked like it got a bit of a visual bump, and hairstyles were definitely not a thing in the Wii U version. Hoping it means Wii U ports with some small upgrades, because dangit I need to have Smash 4 (or the Smash 4 roster) on this thing.

I thought the ending was interesting, I wonder if Nintendo will be focusing more on eSports with the Switch? Would be cool to see big tournaments with Splatoon or Smash.
Warp2063 October 20th, 2016, 9:58 pm
Just a Splatter
Aren't the newer nVidia chipsets designed to be good at streaming? I wouldn't be surprised to see things like Twitch streaming baked in like we do on other consoles. Or maybe their own flavor, but hopefully they'll allow for existing services and actually let streaming happen and not be as restrictive as they have been.

could this be the influence of the new president, kimishima?

check out Color TV-Game product from 1977. the Pong assist trophy from sm4sh is actually this console That system was released under the legendary Hiroshi Yamauchi's leadership. The dude who turned Nintendo from playing cards to toys to videogames and apparently ran Nintendo the same way Steve Jobs ran apple. Before the Wii came out he said this:


Yamauchi wrote:I have been saying this for some time, but customers are not interested in grand games with higher-quality graphics and sound and epic stories. Cutting-edge technologies and multiple functions do not necessarily lead to more fun. The excessively hardware-oriented way of thinking is totally wrong, but manufacturers are just throwing money at developing higher-performance hardware.

He was also the man who wanted to bet the company on the DS (as he had done with previous products). He gave his final request to Iwata: "that Nintendo give birth to wholly new ideas and create hardware which reflects that ideal. And make software that adheres to that same standard.

Iwata brought a more financial perspective to the company. His original job was corporate planning & cost cutting. He reorganized the company in 2004 and reversed the Steve Jobs-esque culture of top-down decision making to a bottom-up structure where everyone had the opportunity for their game ideas to be realized. He was conservative on online, but pushed Nintendo to innovate by following through with both the DS and Wii.

Iwata inspired transparency at Nintendo with his policies as well as his practice by doing things like Iwata Asks. He saw Nintendo through some of the best of times and some of the worst. He took things very personally -- getting involved with programming Melee, chopping his salary when Nintendo posted a loss, and working tirelessly even through his fatal illness. And now, just as Iwata implemented Yamauchi's idea for the DS, we find Kimishima tasked with implementing the Nintendo Switch, My Nintendo, and smartphone games.


My take is that this guy is the finance guy Nintendo investors have been demanding take the helm since the Wii and DS slowed down. Yamauchi was an entrepreneur; Iwata was an engineer; Kimishima is a businessman. He's here to make money and turn the company around. Does that mean whoring out IP to mobile developers? Yes. Does that mean cashing in with some box office films? Yes. Does that mean building the Nintendo Switch? Yes.

My guess is that the Switch is going to be pretty cool, but also that Nintendo will milk it too long and end up with a dry old cow. The concept could theoretically surpass Wii-level craze if the trailer we've seen becomes reality. Maybe this will be the last generation of dedicated gaming consoles...

Also from an interview, I read that he thinks the Switch won't kill the 3DS or but will stand alongside it. Reminds me of when the DS was announced as a "third pillar" in addition to Game Boy and GameCube -- a totally cautious and wrong statement.

January 12 is the next reveal date w/ a Nintendo Direct that's going to show a software lineup meant to tip the scales.

Ray wrote:Anyone know if the Switch is a touchscreen?

Ray wrote:Also from an interview, I read that he thinks the Switch won't kill the 3DS or but will stand alongside it. Reminds me of when the DS was announced as a "third pillar" in addition to Game Boy and GameCube -- a totally cautious and wrong statement.

Interesting, I was wondering about that as well; how the 3DS will look after this, especially given the *NEW* 3DS just recently coming out. It still seems to be a fairly lively platform.

Maybe since the Switch is larger, the 3DS still has appeal because of the pocket size. The Switch definitely doesn't seem like it was designed for pocket from what I've seen, but definitely portable. Think laptop vs phone.
Warp2063 November 2nd, 2016, 6:50 pm
Just a Splatter
I don't think that the Switch will replace the 3DS. At least not in this incarnation.

The 3DS, even in its new 3DS incarnation, feels a bit dated. I still love it, it still has plenty of potential, don't get me wrong, but there is at least one more generation of handheld that needs to happen for Nintendo. In my opinion, the Switch isn't it.

The big thing is going to be timing. I feel like we're in the later years of the 3DS, but it's still got a few years left in it. Nintendo will either extend the generation one more time, further confusing the 3DS family (I don't think this will be the case), or create a new handheld that *might* do backwards compatibility with the 3DS and maybe even the DS - I can't say.

The other possibility that I see is a meet somewhere in the middle - e.g. the PS Vita. This has the potential to be really good or really bad, depending on how they do it. They bring their handhelds up to a semi-console level, or dumb down a console to a handheld level. It could be a failed attempt (like the Vita, that just gets ports and is not much of a necessity) or a true, shining hybrid of platforms. It would be really cool to have a more portable, pocket-sized Switch. If it can play the Switch cards, that's awesome.

'course, this is Nintendo. But a different Nintendo, with different people at the helm. So it's unpredictable in a different way.

I don't think the DS or 3DS really ever were pocket gaming devices. 3DS really is a great platform, and with the price down and such an amazing library, I agree both development and sales should stay strong for at least a couple years.

Though it has always been backpack sized, not pocket sized, and I think the Switch has a chance of getting to the same place in our lives.

You know what would be huge? If Nintendo got mobile/tablet game devs to release on Switch.

Ray wrote:You know what would be huge? If Nintendo got mobile/tablet game devs to release on Switch.

Heh, now that's interesting... An app ecosystem, but stronger than the current digital options that are available now (not saying those are bad by any means, there's just not a lot of them).
Warp2063 November 7th, 2016, 7:37 pm
Just a Splatter

Ray wrote:You know what would be huge? If Nintendo got mobile/tablet game devs to release on Switch.

As I understood it, they had some incentive program to try to get mobile app developers to port their software to the Wii U. Maybe with the system being powered by ARM chipsets like the majority of smartphones and the inclusion of multitouch (and I'd hope better support from more of the major graphics engines), we'll see greater adoption of this program.
Warp2063 December 6th, 2016, 10:22 pm
Just a Splatter 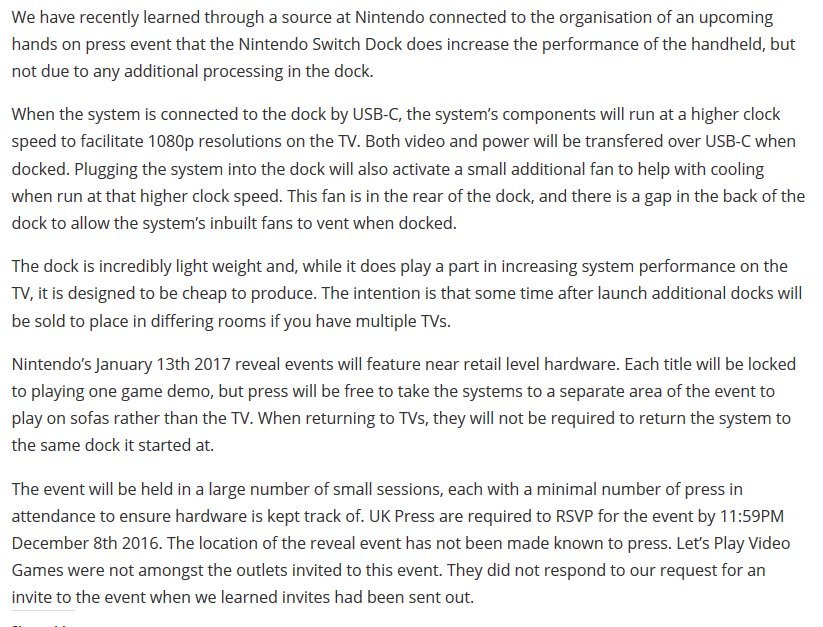 link470 December 7th, 2016, 7:35 pm
NC Server Administrator
That's actually a really smart idea; making the dock inexpensive and having the ability for a Switch to plug in to any dock. Makes it easy to bring it to a friend's house or another TV, as they said. I like that.
Warp2063 December 8th, 2016, 12:55 pm
Just a Splatter
Not sure that this goes here because it touches a lot of bases, but...

Users browsing this forum: No registered users and 1 guest