What have you sold or gotten rid of that you regret?

link470 October 24th, 2017, 11:25 pm
NC Server Administrator
In gaming, is there anything you've ever sold or gotten rid of or given away that you regret?

I've always kept all of my gaming stuff that I own, with the exception of one thing. When I was little, I had a Sega Game Gear, a few games, and a battery pack for it. I ended up selling it to a video game store when I was probably 11 or so, and I traded it in so I could buy myself a Nintendo 64. The Game Gear and games/accessories is the only thing I've ever sold.

Our family already had one, but I was living with my step family and the console wasn't mine, it was a family console, and since there were often arguments about who could play and that sort of thing between me and the step siblings, I wanted to have my own where I could quietly play single player games by myself. I still have my N64 and all games.

I don't regret the decision though, cause it got me a Nintendo 64 and that console is one of the best consoles of all time and got me MANY times the hours that the Game Gear ever did. I went back to that store a few times afterwards over the next couple of years, and the Game Gear was still in the front display case with all the games I had on sale. I thought about buying it back at some point. But when I went there after a couple more years, the store had closed.

Monkey October 25th, 2017, 1:40 pm
Jon
I had a game boy lite and it was really cool. It was like a game boy pocket with a backlight like on those older digital watches. I think Warp bought it actually.

My brother stole my N64 and I miss it dearly. I want to break 2000 hits on Star Fox 64. I kept track of all my personal best scores per level and I just needed to string together a good run.

Drevin October 25th, 2017, 1:50 pm
Flock off
Definitely regret selling off my N64 collection. It was at a garage sale and for peanuts - but the one positive I have is that I know they went to a new home with excited players. It was bought by a Mom for her daughters, and you could see their eyes light up when they saw Ocarina of Time in the pile (among other games).

I gave away my SNES collection to my uncle since he said he needed something to do... rumor has it that he gave it away to a now ex-girlfriend, which sucks. I'll never see it again.

I also sold a few DS games that I finished or didn't want to play - but years later I've wanted to fire them up again.

Since then - I don't sell my games (or much else) in general.

Your bro stole it? How'd he manage that? Did it happen when you were older (and therefore the 'rents didn't step in)?

Yeah it happened in the past few years. I kept it at my parents’ house and I’d play Star Fox if I ever went over and no one was home or something. It went missing and later or I found a blog post on his company’s website by his coworker and roommate saying they’d gone down to his parents house in NH and taken it. It was a smoking gun, but he’s never actually admitted to it.

Ray October 25th, 2017, 10:02 pm
i sold my final fantasy tactics advance to gamestop and went back a few days later to rebuy it. i had to ask the employee to let me test each of the cartridges to find my save file

Ray wrote: ↑
October 25th, 2017, 10:02 pm
i sold my final fantasy tactics advance to gamestop and went back a few days later to rebuy it. i had to ask the employee to let me test each of the cartridges to find my save file

just took these for ya 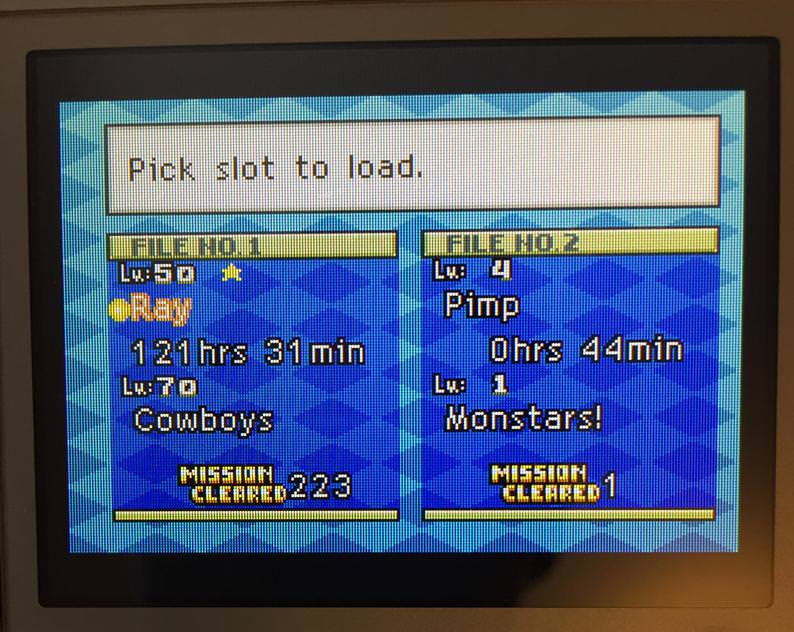 karrtmomil October 26th, 2017, 8:00 pm
I had no choice but when we got a ps1 my parents got rid of the atari 2600 we had previously gotten from a neighbor. No more joust or pitfall.